Meet the Mozarts in my latest novel, Murder Backstage! 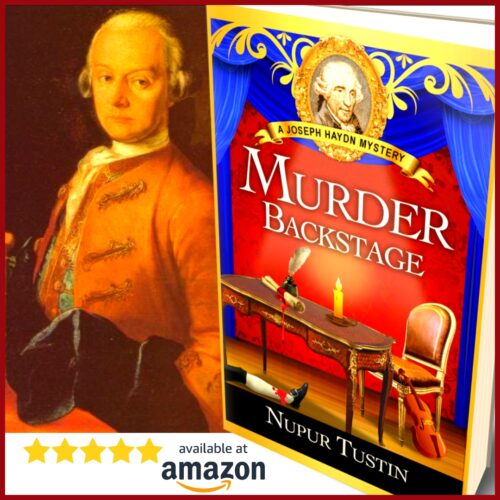 Murder Backstage takes place in Vienna in the year 1770. But the plot is based on events that took place in 1768. The young Mozart was in the Austrian capital with his parents and sister at the time. Leopold Mozart, determined to embark his brilliantly talented young son on the world stage, had decided that the best way to take Vienna by storm would be have the young prodigy write an opera.

The opera in question, La finta semplice, was never performed in the Burgtheater. Giuseppe Affligio—the murder victim in my mystery—thought the work untheatrical and not fit to be performed. In fact, Affligio was so set against its performance, he boldly informed Leopold that he’d arrange to have the opera booed off the stage if Leopold insisted on “prostituting” his son.

Yes, those were the precise words Affligio used. For a mystery writer, no richer fodder for the imagination could be found. And so was born Murder Backstage, a novel in which you’ll meet three of the four Mozarts: the young Mozart, Leopold, his father, and Anna Maria, his mother.

And now here’s a brief excerpt from the novel for you to enjoy:

Haydn struggled to take in the news. Why should as reputed a violinist and composer as Leopold Mozart be suspected of murdering the impresario of the Burgtheater? What dealings could the two men have had?

Leopold had no ambitions of writing an opera, did he? Had never written one as far as Haydn knew.

“You were truly unaware of this?” Michael looked at him, eyes narrowed in suspicion.

“Until you informed me of it, yes,” Haydn said. “Why did the police arrest him?”

Michael’s exasperation expressed itself in a roll of the eyes. “They insist Leopold must have killed Affligio, being the last person to see him alive.”

Ach so! Haydn nodded. He remembered von Beer saying something to that effect.

“Had he any reason to?” He scrutinized his brother’s face, recalling some of what Karl had said about the Salzburger.

His brother opened his mouth, but Haydn interrupted before he could say anything. “They will not have taken him in without good reason, as you well know.”

“There was some dispute about the staging of an opera,” Michael conceded reluctantly. “Affligio said things no man should have said. It was unforgivable. Leopold was incensed, of course. What man wouldn’t be?”

“Who heard the dispute?”

Get Your Copy of Murder Backstage Now!