Tragedy at the Burgtheater: An Excerpt 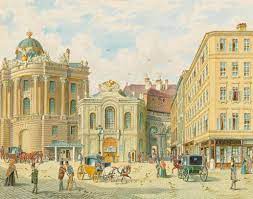 Much of Murder Backstage, the fourth Joseph Haydn Mystery, is set in the Burgtheater. The court theater is pictured above in its old location near the Spanish Riding School.

Believe it or not, the building was originally used to play a game that was a forerunner to lawn tennis. Shortly after Maria Theresa, the Empress in the Haydn Mysteries, ascended the Austrian throne, she had the place converted to a theater. It officially opened in May 1748.

Murder Backstage opens about twenty-two years later in 1770. The impresario is Giuseppe Affligio. Haydn is in Vienna at the invitation of the Empress to have his opera Le pescatrici performed at the Burgtheater. All is going as well as it can be expected to when tragedy strikes.

Here’s an excerpt, from the point of view of palace maids Rosalie and Greta. The women are also fellow sleuths in all the Haydn Mysteries:

The effects of the unfortunate incident are far-reaching and affect the Theater am Kärntnertor as well.

“It seems to be a death,” Rosalie replied, reading the next line in the newspaper. “The public will be saddened to learn that a most honorable personage associated with both theaters is no more.”

“Must be one of the singers,” Greta remarked. “God knows, some of them are old enough to be halfway to their grave.” Her features brightened. “Well, they can hardly blame Karl for that.”

As a stagehand, Greta’s sweetheart, Karl Schulze, could be faulted for accidents with the ropes and sandbags used for the theater’s rigging or a fire caused by the candles that illuminated the stage. But if an aging singer had met their Maker, that was surely nothing to do with Karl.

Rosalie was about to agree when her gaze fell on the next section.

We regret to report the death was neither due to natural causes nor due to any sudden or prolonged illness. It was—dear reader, we pray you are seated—nothing less than murder!

“Dear God,” Rosalie breathed out the words in a hushed whisper. “The poor soul was murdered.”

“Murder!” Greta squealed, tugging the newspaper toward her. “Where does it say that? Why would anyone murder a singer? Whoever it is must be quite important. I’ve rarely seen the Prince in such a pother. Do you think they want Herr Haydn to look into the matter?”

“They must.” There was seldom a crime in their vicinity that the Kapellmeister wasn’t called upon to investigate. “But it wasn’t a singer who was murdered,” Rosalie added quietly. “It was the impresario himself. Look!”

Giuseppe Affligio, the gentleman in question, was found stabbed to death in the small private chambers he occupied beneath the stage of the Burgtheater.

“No one knew about Herr Affligio’s chambers down there, Rosalie.” Greta’s face had turned pale and her plump fingers closed tightly around Rosalie’s wrist. “No one save those who worked with him.”

Rosalie nodded. “That’s exactly what the article says.” She read the passage out loud.

“The location of Herr Affligio’s quarters below stage was known to few people beyond the employees of the Burgtheater. Members of the general public could meet the great impresario only by appointment in a small office adjoining the ticket booth outside the auditorium.

“Therefore, it is speculated the killer was someone known to the unfortunate gentleman.”

“Oh, Rosalie!” Greta wailed. “They will blame Karl for it. For all we know, they already have. He must be in jail by now. I should’ve known something was wrong when he didn’t keep our appointment yesterday.”